The hardest part about Jiu Jitsu is the degree in which you fail.  When you first begin it feels like your failure rate is 95%.  Coping with the constant feeling of failure is daunting and it is why many people quit so soon after they begin.  One I found a Jiu Jitsu school in Morris County I immediately fell in love with BJJ.  I was not mentally equipped to deal with the fact that I was consistently getting tapped by a young kid who weighed fifty pounds less than me when I was a white belt.   I almost quit several times within my first year. 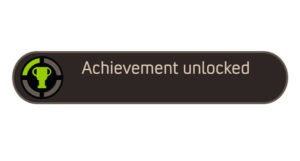 In order to cope I needed to reframe my perception of how to practice BJJ.  I turned to video games.  At the time I was an avid X-Box player, when playing I started to wonder why I was becoming so immersed in the games I played.  It dawned on me that my continual playing was based around the structure of achievement awards.  In most games the player would be given a task or puzzle that was just out of the reach of their experience level.  The first few attempts were met with failure but during the failure the path to success was often shown.  I realize comparing Jiu Jitsu to video games is like comparing apples to oranges but the ideas of achievements and goal setting are the same.

In Jiu Jitsu when you only look at success in the lens of submit or be submitted you lose sight of all the achievements you could be unlocking.  When training with a higher belt your achievement could be surviving the round without getting caught in a submission.  When training with a lower belt your achievement could be working to escape from bad positions and recovering guard.  Having these small goals when you train not only makes the experience more rewarding but it allowed you to practice specific techniques.

benefits.  This perspective will help with longevity and reduce injury.  Being able to accept and work from a disadvantaged position means you won’t risk putting yourself in harm’s way trying to force an advantageous one.  Our ultimate goal in BJJ is to have fun and train for a lifetime.  It is never fun watching from the sidelines.